The international hip hop sensation known as 2K Ponce Juno from Staten Island, NY, by way of Antigua, holds the title as a recording artist of Sony Music Group, and owner of Ellipse Group Records Global LLC, Star Music Group LLC, and EGR Global Music Publishing/BMI, an entertainment music label that is the home of urban music and hip hop.

As professional entertainer, 2K Ponce Juno has worked with a collection of producers to release his first album titled, “Concrete.”  Being raised by a West Indian culture gave him a “don’t give up” mindset and attitude.

In 2012, as an entrepreneur in the music industry, he launched his first project “Chicken Grease n’ Grits.” The project got over three thousand hits from Datpiff.com.  He then released his first video titled, “They Like This.”  Prior to COVID-19 and the shutdown of clubs, you could hear 2K Ponce Juno's records blaring in various clubs throughout the north region.

On March 15, 2019, 2K Ponce Juno released a big project titled EP, “Coolli Bandz,” featuring his hit single, “This Life,” which propelled him to be placed on The Takeover Tour, powered by the AAMG family.

2K PONCE Juno expels his positive, yet bouncy, infectious, and feel good vibe in his approach to dominate this industry. Hip hop is his playground and his good aura captures the hearts of all his fans. 2K Ponce Juno's music most certainly embodies a Caribbean New York flair.

The energy he displays on and off the stage is nothing short of electric; his performance will have you mesmerized and asking for more.  His most recent song titled, "Go Pretty Girl Remix," featuring Beenie Man and Double K, produced by Max, was recently premiered on Hot 97.1 by DJ Drewski, as well as your very own, DJ Digital Chris from Irie FM Ochos Rios Jamaica, DJ Sean Fens from World Music by Streaminn Hub Radio, DJ Motivatah and Suncity 104.9 FM, and DJ Sincere from Drtybsmnt Radio.  People from all over who hear this record fall instantly in love with it.  It has been called a timeless song the world will love for a very long time. 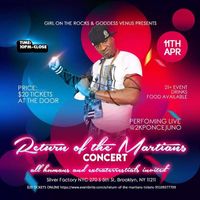